Farmer : No second crop, no money

Created
วันพุธ, 29 ตุลาคม 2557
Created by
Bangkok Post
Categories
English
Written by Bangkok Post , 16 Oct 2014
CHAI NAT – A rice farmer who normally grows two crops a year has criticised the government for not releasing water for another planting this year despite the looming water shortage, saying he will have no work for seven or eight months and no income. 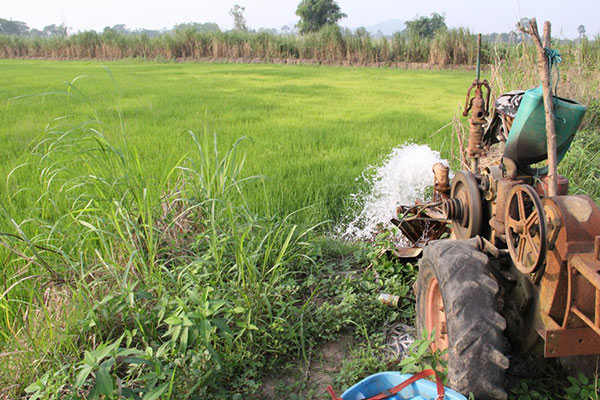 A farmer pumps water into his dry rice field, with the crop still not ready for harvest.
Chanachai Gunkerd, 46, a farmer based in tambon Hat Arsa of Sapphaya district, said he was unhappy about the government’s request that farmers cooperate and not plant a second-crop rice, and with the announced restriction on irrigation water.
He complained it was "unfair" to farmers.
“If farmers can grow only main-crop rice, they will be unemployed with no income for seven to eight months, so all families will face difficulties with no money to buy food, clothes and other necessities,” he said.
Many farmers are looking for other ways to grow a second crop, so they can put aside some money to pay for planting and caring for the main crop next year.
He said in his area, farmers were now reduced to planting only 10-15 rai of rice each, just enough to feed their families.
“We don’t want the government and the general public to view us as being stubborn. We just want enough rice to eat during the dry season. Farmers do not get salaries or paid vacations,” said Mr Chanachai.
The current crop would be ready for harvesting in January in Chai Nat, then farmers would have to refrain from a second crop and obey the government’s announcement, he said.